The whole Mudra crew was in a funk. Having just wrapped a 6-show run of Gyaan, a major production that dealt with heavy themes that we all put pretty much everything we had into producing and performing, we were down like Charlie Brown. Anyone who’s ever performed anything knows what kind of loss the day after the last show is. You might be glad the grind is over but there’s a big hole you now have to carry around where purpose, community, and satisfying creative expression used to be.

Our hole was deep. It was like being dumped. So when Ignite Denver called with the news that one of their speakers had dropped out sick two days before their event, and would we (could we) do A Rhythm Runs Through it again, it was like a booty call from the perfect no-strings attached special friend.

SF1 was available. Last year’s dancers—Neeti and Shefali—plus an additional one were down. So the dancers updated the choreography one evening in our living room (my dog Tibka wanted in the act… maybe next year) and we headed for the Oriental Theater. 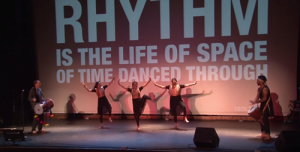 I felt the theme of syncopation that night even stronger than I did at the Paramount last year. Having spent the past several months deeply immersed in a creative project, and reentering my professional world more deeply, I was going through my own personal re-synching. I was missing my creative partners but was really starting to get excited about re-prioritizing the consulting work.

I felt like the audience was connecting too. You can’t see them during the bhangra workshop at the end of the clip but just about everyone was up and moving. I remember looking up into the balcony and seeing some folks up there, all alone, shaking it as well.

I’ve really come to appreciate the people of Ignite Denver. People like Terry, Jared, Rick, Daniel… Creative spirits driven by not much else than tying to spread ideas. And of course John Wilker of Denwhere. Is there anything more important than creating spaces for people to express themselves?

They were the perfect rebound relationship for some lost souls. Thanks, Ignite. I have a feeling it wasn’t a one night stand.

Pass the Salt and Pepper