Skip to content
25Feb 2011 by Aaron Templer No Comments 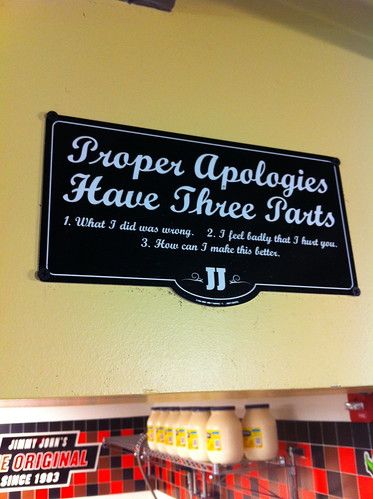 If you feel like you need to apologize more in your life, here are three suggestions.

I’ve never held a public office and I’ve never run a Super Bowl ad. This would make me, you might suggest, exceptionally unqualified to offer an opinion about how to apologize following a gaffe in either position.

I am married though. And I apologize quite a bit. Given the success rate of these apologies I suppose I’m even less qualified to give advice from that position. So I figure why not opine on the first two?

Here’s what I do know about being married. Even after moments of the most supreme self confidence, you’ll always – always – need the other person later.

The sooner the better, I say, when it comes to getting on with things like sharing the cleaning duties, a guilt-free boys/girls nights out, or sex. The best way to do this is actually pretty simple: own whatever it is you did and/or are accused of having done that has caused the disruption, express that you feel bad about hurting his/her feelings (preferably with at least a basic demonstration of having heard his/her expression of said hurt feelings), and don’t ever do it again (even if you’re unsure what to not do again).

Kansas Representative Lynn Jenkins didn’t quite get this. Rep. Jenkins – who will need a broad base of constituents as much as I need my wife – told a forum that the GOP needs to “find the great white hope” to move forward. This was perceived as a racist comment. There’s a racist history of the phrase, and the fact that her opposition is led by an African American (that would be our President, Rep. Jenkins) didn’t help her. Rep. Jenkins said she used the phrase as an allusion to a bright light, not a white person.

As out of touch and self absorbed as our elected officials tend to be, I have no hesitation believing that she didn’t know the origin of the phrase and the connotations it carries. Her her apology was pitiful, though, doubtless a reflection of the same egocentric part of her intellect that disabled her from foreseeing the problematic nature of using “white” and “hope” in a political situation to begin with.

“Obviously I was discussing the future of the Republican Party in response to a question about is there any hope for Republicans…I was explaining that there are some bright lights in the House, and I was unaware of any negative connotation. If I offended somebody, obviously I apologize.”

Obviously and If: The death knells of an authentic apology.

In Spineless Apology Parlance, “Obviously” means both “I actually shouldn’t have to apologize at all – y’all should just know that I don’t want to intentionally offend anyone who might vote for me” and “My narcissism prevents me from remotely considering any other perspectives on this issue. If you’re offended, you just don’t get it.”

“If” means both “I’m not about to admit to being wrong because I’m not human and don’t make mistakes” and a callow proclamation of “If it didn’t offend anyone, what’s the diff?”

She owned nothing, shamelessly squirming out the whole situation. “Apologize” doesn’t indicate any kind of regret in the first place, and since she didn’t learn anything, we’re forced to expect her to do something like this again. No trust, no relationship, Rep. Jenkins. You missed an opportunity to build one for the other.

Groupon CEO Andrew Mason didn’t miss his opportunity. After several days of controversy surrounding a Super Bowl ad that offended many, he hit us up with this apology on his blog:

“Five days have passed since the Super Bowl, and one thing is clear – our ads offended a lot of people…if an ad requires an explanation, that means it didn’t work…We hate that we offended people, and we’re very sorry that we did – it’s the last thing we wanted. We’ve listened to your feedback, and since we don’t see the point in continuing to anger people, we’re pulling the ads…We thought we were poking fun at ourselves, but clearly the execution was off and the joke didn’t come through. I personally take responsibility; although we worked with a professional ad agency, in the end, it was my decision to run the ads.

To those who were offended, I feel terrible that we made you feel bad. While we’ve always been a little quirky, we certainly aren’t trying to be the kind of company that builds its brand on creating controversy – we think the quality of our product is a much stronger message.”

Talk about owning it. The only “If” here is used to set up a mea culpa for the ad not working. He acknowledges that he offended people – doesn’t wish-wash about it with an If  – takes responsibility that he’s the one that needed to do the learning, and tells us how he feels after learning people were offended.

And he’s providing a remedy. He’s pulling the ads.

It would have been exceedingly easy for Rep. Jenkins to say “I feel terrible that I made you feel bad.” Or “Many people have pointed out to me that my statement has a history and connotation that is not in alignment with my or the GOP’s values. Now that I’ve learned what the phrase means to many of you, I just want to say that that’s the last thing I wanted to convey.” Or “I’m a bold and tough representative in a time when we need strong leadership, but certainly not the kind of public figure that relies on controversy to be heard. I want to inspire people to get behind my ideas – ideas like (insert Good Ideas Here) which are much stronger in terms of leading our country than flip, controversial comments will ever be.”

And yes – she could have provided a remedy. Promise to not use that phrase anymore, and maybe hire someone on your staff who can school you a bit on diverse perspectives.

Mason saw his apology as an opportunity to build trust and highlight the strengths of his brand. Rep. Jenkins saw it and those who were offended as annoying flies to brush off. Which do you think will create a stronger marriage between stakeholders?

Oh, and honey? If you’re reading? Obviously I was sarcastically discussing the function of marriage, taking a funny position of it serving me only. By way of the sarcasm, I was explaining that marriage is a selfless contract of sorts. If I offended you, obviously I apologize.

Pass the Salt and Pepper