Let’s Start with the Results 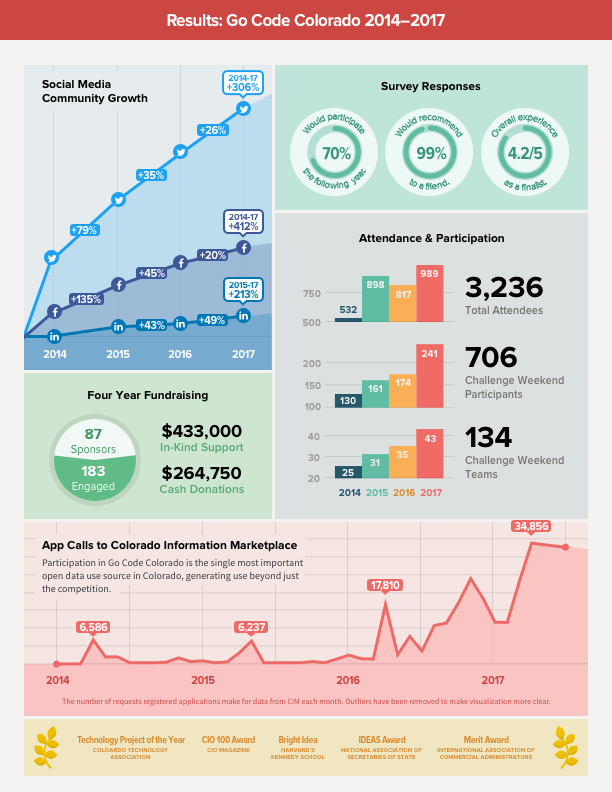 And then Tell a Story

On to the details…

Throughout his tenure, President Obama championed the idea of Government 2.0, a more efficient and less bureaucratic approach to government initiatives that more closely mirrors the private sector. This inspired government leaders to become more transparent and open data policy was an important step.

The Colorado Secretary of State’s office wanted to leverage the mass of public data produced every year. Brian Gryth was part of the operational support team and as an open data activist and cofounder of Open Colorado, he wanted to put this task into the hands of developers through a public data movement. But there were hurdles.

The Secretary of State team envisioned a series of events more engaging and sustainable than a one-time hackathon. But they didn’t know their audience. And as a government entity, they weren’t familiar with the entrepreneurial world of branding and marketing.

“We put together a summary and timeline and the legislature approved it,” says Gryth. “But when Aaron and the team went to validate the pitch, he found flaws. With such a complex dichotomy of audiences, there wasn’t a way to keep people engaged. Aaron literally rejected our plan. It was a tough thing to hear. But we realized he was right.”

So the Secretary of State’s office had to pivot — substantially — and let this new team run with the idea.

Aaron Templer LLC (now Three Over Four) and LadyCoders (now Equili)—under contract with Commerce Kitchen—developed a model for a statewide, three-month apps challenge, bringing developers and entrepreneurs together to build successful business apps with public data. The breakthrough idea: Hold the meat of the program—an app challenge that most resembled a hackathon—simultaneously in five cities across the state. Choose two winning teams from each location, and send the 10 winning teams to a mentor weekend where they could rub shoulders with tech developers and entrepreneurs to hone their ideas. And then bring them all to Denver for a best-in-class final pitch event where three teams would be awarded real, big-money contracts with the state.

This concept, which by the second year was run entirely through a partnership between LadyCoders LLC and Aaron Templer LLC, grew to over 12 annual events, all supported by several software project management platforms, managed by an assembled team of 15 marketing, event, and community-building experts, including location-specific specialists and multiple project managers.

The team’s contracted responsibilities were expansive:

“I don’t know how they did it,” says Gryth. “It’s like they had a compass and true north, but didn’t have a map. They were building the plane while flying it. There’s a bravery that comes with that.”

Brand management was a totally new discipline for the Secretary of State’s office. This was complicated by Go Code Colorado requiring a hybrid brand platform to bridge the public and private sectors.

“Aaron came in with a beginner mind to really examine the context,” says Gryth. “He built a very tight brand that was both true to the state and appealing to the public—about something that hadn’t even been created yet. No simple task.”

Another quagmire was trying to build a concrete brand for the very abstract idea of technology.

Brian Watson was a community volunteer for Go Code Colorado, a critical partner in helping build the success of the program. “When it comes to coding and apps,” he said, “it’s sometimes tough to explain something you can’t see. But this was something tangible. A real brand people could touch.”

The resulting brand platform included several dimensions around which to build an identity and integrated messaging: culture, key stakeholders, values, personality and essence. Each dimension included comprehensive definitions and brand governance was an ongoing task.

Without a statute in years one and two, we had to validate the funding, consistently articulating and defining the value of Go Code Colorado to the joint budgeting committee with storytelling, metrics, PR and media outreach. However, because the government wasn’t technical, translation was critical. Our key challenges:

In year two, Andrew Cole took over as Go Code Colorado’s program manager for the Secretary of State’s office.

“Working with Aaron and Elaine was like working with a colleague, not an agency. Because we shared an intellectual curiosity about the project, we were able to hurdle strategic obstacles and accomplish program goals with ease. Even when they came to me about budget, it was never in a contrarian spirit. No battles, just brainstorming. They were pushed to do less with more, yet still we grew the program participation every year.”

In addition to classic marketing tactics, we empowered local community members to promote within their circles of influence. “As an advocate for Go Code Colorado, we needed materials—lots of them,” said Watson. “The team equipped me time and time again with marketing pieces that made us look and feel legitimate. That mattered.”

We thought long-term and mapped a brand journey across multiple years. This included award submissions, educational events and partnerships with innovation centers that could fuse Go Code Colorado marketing materials with other burgeoning and recognizable brands along the Front Range.

Each year we went back to the drawing board to understand what the next iteration of Go Code Colorado should symbolize. How should it be growing? How should it be changing? What had we learned?

To create brand affinity and keep participants engaged we designed a unique identity every year, building off the core but tapping into the evolving zeitgeist and relevant trends.

COMMUNITY BUILDING: Relationships Across the Rockies

It was important to build relationships face-to-face, something our government client taught us and that we incorporated into our strategy. As we traveled across the state, we ventured into targeted meetups, co-working facilities, economic development offices, and developer garages, as well as demographic-specific groups like women in tech, veterans and high school students. And we realized we had a lot to offer: enticing access to tools, expansive data, entrepreneurial mentorship and the chance to win real seed money. In short, it was clear Go Code Colorado could act as a magnet to help existing efforts to build tech entrepreneur communities.

We were seeking not only participants, but partners, judges, host locations and other supporters. And since we could align program values and outcomes with the community, we built deeply engaged relationships across the state.

One Size Never Fits All

But not all communities are created equal. Some locations like Durango and Grand Junction had tech communities that were barely off the ground. We knew we had to let them lead.

“The best thing they did was lean on us,” says Brian Watson. “They weren’t attached to a specific structure. They knew that we knew our community best and provided materials so we could run with the ball.”

In Denver, nationally renowned as a center of start-up action, we leveraged expertise and mentorships to feed competitors. Fort Collins and Colorado Springs had a foundation, but soon realized Go Code Colorado could be a galvanizing force to build their talented communities.

But evolution was critical in order to remain on the leading edge—something our audience demanded. So we built and innovated on what we learned.

“When it came to feedback, Aaron and Elaine were never offended, always flexible. They not only listened, but made adjustments based on what they heard,” said Hannah Parsons, former co-owner of Epicentral Coworking and current Chief Economic Development Officer at Colorado Springs Chamber and EDC.

Sponsorship acquisition included two major priorities. First was validation. We knew that enterprise buy-in from tech giants like Google would prove our worth. Their names elevated the event into much more than just a hackathon. It gave Go Code Colorado status in the coder community and that mattered.

Second was resources. Sponsor funding allowed us to keep events free and participants well fed. Their data created a richer competition, their technologies made operations flow more smoothly, their offices provided a collaborative workspace and their innovative mentorship allowed competitors to learn constantly and build a powerful, lasting network. Finally, we were able to secure automatic interviews to world-renowned accelerators and expenses-paid trips for the winning teams, which gave legitimacy to the Go Code Colorado program.

Selling these major players on the concept required storytelling and a compelling demonstration of value. We secured sponsorships from the likes of Google, CA Technologies, Twitter and Salesforce, and incubators like TechStars, Boomtown and Foundry.

EVENT MANAGEMENT: Trust-Building and Boots on the Ground

Blending the spirit of developers, entrepreneurs, economic officials and community leaders into one united program with aligned values was no simple task. And that was just the atmosphere. Logistics were complex and critical.

“Elaine is a connector, and she’s been in advertising for two decades,” said Gryth. “But the best part is that she’s also a coder. So she understood what was actually happening, and that made a big difference.”

In the spirit of open data, all Go Code Colorado events were free and open to the public, and therefore strongly community-driven. To keep one eye on the bigger picture and one eye on myriad details, we managed a team of specialists on the ground at each location, arming them with materials and checklists, and setting goals and expectations.

“Aaron and Elaine retained key players year after year, said Cole. ”They somehow assembled teams of people who were experts in their field and could also flex to Go Code Colorado’s erratic schedule.”

From the outset Go Code Colorado was a very collaborative effort involving several brilliant minds, many of whom have gone on to other amazing things. It all started through a partnership with Commerce Kitchen, led by Jamie Hollier and the brilliant marketing minds of Leslie James, Michelle Drumm, and Natalie Winslow (Michelle and Natalie now run New Why, check them out).

And, as mentioned, we ran Go Code Colorado in partnership with Elaine Marino who now runs her company Equili.